Posted by Penticton Foundry on October 6, 2016

In this blog post Penticton Foundry discussed a report from a local mine in British Columbia.  The mine had noted the superior wear performance of chrome white iron as compared to AR 400 plate.

The question is – why is chrome white iron superior to AR 400 plate?  The answer lies in both its microstructure and macrostructure. 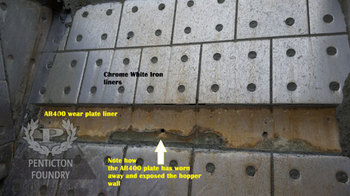 martensite.  The remainder of the microstructure of chrome white iron is comprised of carbides which are over 4x harder than martensite.

There are several advantages both from a microstructure and macrostructure perspective that allow chrome white iron to outperform AR 400 plate in a variety of applications.

The Myth of Chrome White Iron and Hardness